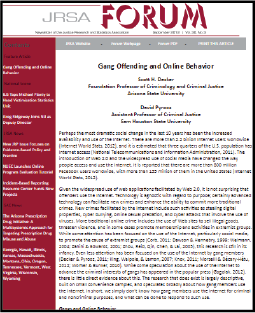 Perhaps the most dramatic social change in the last 10 years has been the increased availability and use of the Internet. There are more than 2.2 billion Internet users worldwide (Internet World Stats, 2012), and it is estimated that three quarters of the U.S. population has Internet access (National Telecommunications and Information Administration, 2011). The introduction of Web 2.0 and the widespread use of social media have changed the way people access and use the Internet. It is reported that there are more than 800 million Facebook users worldwide, with more than 155 million of them in the United States (Internet World Stats, 2012).

Given the widespread use of web applications facilitated by Web 2.0, it is not surprising that offenders use the Internet. Technology is agnostic with regard to purpose; certainly advanced technology can facilitate new crimes and enhance the ability to commit more traditional crimes. New crimes facilitated by the Internet include such activities as stealing digital properties, cyber bullying, online sexual predation, and cyber attacks that involve the use of viruses. More traditional online crime includes the use of Web sites to sell illegal goods, threaten violence, and in some cases promote membership and activities in extremist groups. While some attention has been focused on the use of the Internet, particularly social media, to promote the cause of extremist groups (Corb, 2011; Dawson & Hennebry, 1999; Weimann, 2004; Zanini & Edwards, 2001; Zhou, Reid, Qin, Chen, & Lai, 2005), this research is still in its infancy. Even less attention has been focused on the use of the Internet by gang members (Decker & Pyrooz, 2011; King, Walpole, & Lamon, 2007; Knox, 2011; Morselli & Décary-Hétu, 2012; Womer & Bunker, 2010). While some speculation about the use of the Internet to advance the criminal interests of gangs has appeared in the popular press (Gogolak, 2012), there is little direct evidence about this. The research that does exist is largely descriptive, built on small convenience samples, and speculates broadly about how gang members use the Internet. In short, we simply don't know how gang members use the Internet for criminal and noncriminal purposes, and what can be done to respond to such use.