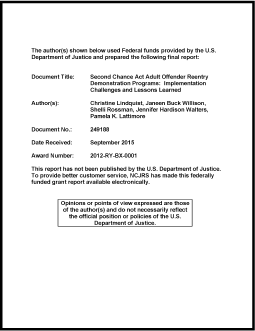 More than 623,000 prisoners were released from state and federal prisons across the country in 2013, and another 11.6 million cycle through the nation’s jails each year.

The Second Chance Act: Community Safety Through Recidivism Prevention was signed into law in 2008 with the goal of increasing reentry programming for offenders released from state prisons and local jails. Since 2009, the Bureau of Justice Assistance (BJA) has awarded hundreds of SCA adult offender reentry demonstration grants to communities across the nation to improve reentry outcomes.

This report is one in a series from the Cross-Site Evaluation of the BJA FY 2011 Second Chance Act Adult Offender Reentry Demonstration Projects (AORDP). It describes the implementation challenges and successes among seven grantees who implemented adult reentry programs using SCA funding.

The AORDP programs are designed to meet the multiple challenges facing former inmates upon their return to the community and provide an array of pre- and post-release services. These services include education and literacy programs, job placement, housing services, and mental health and substance abuse treatment. Risk and needs assessments, transition case planning, and case management are key elements of grantees’ SCA projects.

The primary goals of the evaluation were as follows:

Recommendations offered by grantees to assist similar programs pertained to program administration and partnerships, staffing, and service delivery approaches. Site-specific features and innovations are highlighted in the report.