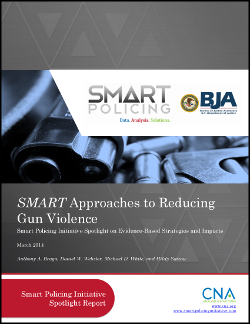 Despite significant decreases in crime nationwide, America continues to experience criminal gun violence at extraordinarily high levels—more than 11,000 individuals are murdered by firearms and 75,000 are treated for nonfatal gunshot wounds at hospitals annually, and these incidents are certainly undercounted in our statistics. Beyond the devastating toll measured in injuries and loss of life, gun violence also imposes a heavy burden on our standard of living, from increased fear and reduced quality of life to depressed property values. While the public tends to focus its attention on mass shootings, the most common forms of gun violence occur on a daily basis involving gang members, violent youth, and others involved in crime. As a result, local police departments are in a strategic position on the front lines poised to curb or even prevent gun crime, injuries, and deaths. In response, a number of departments are experimenting with new, evidence-based strategies and tactics aimed at addressing the chronic and pervasive gun violence problem. Yet, the question remains: Can the police effectively reduce and prevent gun crimes and associated violence?

The Smart Policing Initiative (SPI) emerged on the law enforcement landscape in 2009. With SPI, the Bureau of Justice Assistance (BJA) sought to identify effective and efficient solutions to chronic local crime problems, including gun violence. This program provides a valuable opportunity for local police agencies to partner with academic researchers and rigorously assess whether gun violence reduction strategies have the intended effects on crime, violence, and communities. Indeed, nine of thirty-five SPI-funded police agencies nationwide have targeted gun violence as part of their Smart Policing Initiatives (Boston, MA; Los Angeles, CA; Baltimore, MD; Joliet, IL; Las Vegas, NV; Cambridge/Somerville/Everett, MA; Kansas City, MO; Rochester, NY; and East Palo Alto, CA). This Spotlight report reviews the common strategies that police have employed across those nine sites. These evidence-based strategies, which reflect core tenets of the SPI, are grounded in a risk-focused framework that recognizes the importance of targeting efforts on the places, people, and times at greatest threat of violence. The common strategies identified for implementation in the nine SPI sites include:

We prepared the Gun Violence Spotlight to further the national conversation on the gun violence problem and to provide a resource for local officials seeking to make informed, evidence-based decisions regarding their prevention, intervention, and suppression efforts. Though many of the SPI projects are ongoing, several sites have produced important findings, derived through rigorous research methodologies, which indicate that their interventions have effectively reduced gun violence:

The Boston, Baltimore, and Los Angeles findings are certainly encouraging, and they strongly suggest that the SPI has generated significant declines in gun crime and related violence. Results for other SPI sites will be forthcoming in the near future. This Spotlight identifies a number of next steps for addressing gun violence, most notably the development of supply-side approaches that disrupt illicit gun supply lines and combat illegal gun sales.

This report is a collaborative effort of BJA at the federal level; local police agencies that have stepped outside traditional boundaries to partner with academic researchers; and CNA, the technical assistance provider for SPI. We believe police executives, local decision makers, community members, and others concerned with gun violence will find this report helpful, even instructive, as they seek new and more effective ways to reduce gun violence, improve public safety, and save lives.