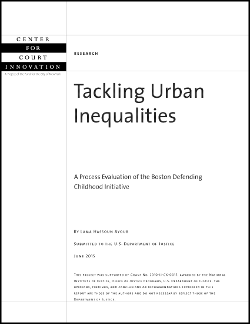 The Initiative had many achievements in its effort to prevent and reduce the impact of children’s exposure to violence. One of the most significant accomplishments was the establishment and continuation of the Collaborative Body, where the project harnessed the resources of the city and brought together a large group of stakeholders and organizations from a variety of fields. The group addressed obstacles to working across fields and encouraged greater collaboration and cooperation amongst organizations that had not interacted before—or that had not interacted on an initiative of this magnitude.

Working predominantly with communities of color, Boston DCI developed a model for centralizing the importance of racial/social justice and health equity during both planning and implementation in nearly every approach for addressing children’s exposure to violence. Examining implicit bias (race, gender, sexual orientation) was a theme across most of the work.

Additionally, Boston DCI successfully implemented evidence-based training programs in the form of Learning Communities and Breakthrough Series, which create an environment of learning and continued engagement for professional and system-wide change. Rather than relying on one-shot training sessions or workshops, Boston DCI embraced a long-term commitment to educating professionals and improving organizations through extensive and continuous training.