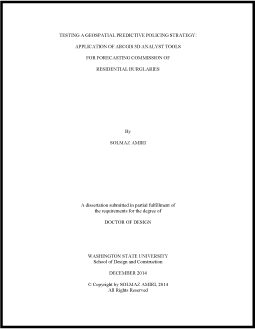 Classical place-based crime prevention theories suggest existence of a relationship between certain characteristics of spatial design, configuration, and crime occurrence. This study explored the relationship between natural surveillance and burglary commissions in three-dimensions. Natural surveillance has been claimed to differ when seen by neighbors, pedestrian passersby, or individuals in vehicles, and to be influenced by viewing distance.

The study, believed to be the only study extant to objectively quantify the notion of “eyes upon the street” in three dimensions, worked to compare the degree or intensity of natural surveillance with burglary occurrence and meet the following objectives:

Develop a method for quantifying architectural and landscape features.

Develop a method for quantifying natural surveillance in three dimensions.

Document whether or not natural surveillance has a significant effect on commission and deterrence of residential burglaries.

Among the study findings were two takeaways that were consistent with previous research: When building openings were distinguished as door and window openings, burglary commission through doors was significantly associated with higher degrees of road surveillability within 49 feet of door openings. And burglary commission through windows was significantly related to lower degrees of occupant surveillability based on distance and not on street segment.