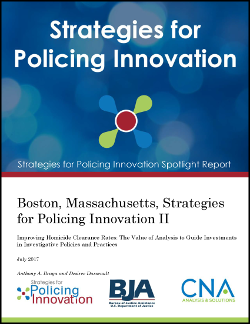 Since the mid-2000s, homicide clearance rates in Boston have been substantially lower than national homicide clearance rates. Between 2004 and 2011, about 44 percent of homicides investigated by the Boston Police Department (BPD) homicide unit were cleared, compared with some 63 percent of homicides investigated by U.S. law enforcement agencies nationwide. With the support of U.S. Bureau of Justice Assistance (BJA) Smart Policing Initiative (SPI) funds, BPD engaged in a problem-oriented policing enterprise to understand the underlying nature of its homicide clearance problem, develop appropriate responses to enhance its investigations of homicide victimizations, and evaluate the impact of the implemented intervention. The problem analysis included an investigation of 314 homicide victimizations from 2007 to 2011, as well as the creation of a homicide advisory committee that identified gaps in its investigative processes and suggested best practices, drawing especially on the United Kingdom model.

The Boston SPI II offers several important lessons for law enforcement agencies seeking to improve their homicide clearance rates. The Boston intervention demonstrates the value of enhancing investigative resources and of adopting a comprehensive resource mindset rather than focusing on one particular resource. The Boston SPI II also demonstrates the effectiveness of the problem-oriented policing approach for analyzing and identifying problems with homicide investigative processes, developing responses to those problems, and assessing the impact of the responses.