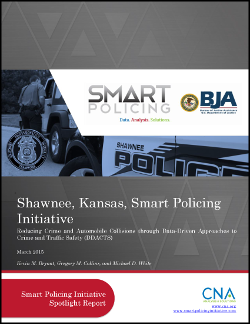 From 2008 to 2010, the city of Shawnee, Kansas, experienced a 22 percent increase in violent crime. At the same time, the Shawnee Police Department (SPD) was acutely aware of persistent traffic accident hot spots. Moreover, budgetary constraints resulted in nearly a 5-percent decrease in the department’s sworn staff in one year (2009). The SPD leadership became increasingly concerned about their ability to maintain a sufficient level of service, and to effectively respond to changing crime trends in the city. In response to these emerging concerns, the SPD implemented the Data-Driven Approaches to Crime and Traffic Safety (DDACTS) model beginning in July 2010. DDACTS identifies locations where crime and traffic problems disproportionately co-occur, and then deploys increased police presence and high-visibility traffic enforcement (HVTE) in those areas. The DDACTS model is grounded in seven guiding principles that highlight collaboration, data-driven decision-making, hot spots policing, and ongoing program assessment and dissemination of findings. In 2011, the Department received funding from the Bureau of Justice Assistance’s Smart Policing Initiative (SPI) to support the implementation of DDACTS and conduct a rigorous evaluation of the impact of the DDACTS model on crime and automobile crashes in the city of Shawnee.

The Shawnee SPI team employed a three-pronged evaluation to examine the implementation and impact of the DDACTS model. First, the SPI team conducted two waves of focus groups with officers from units throughout the department. Results from the focus groups showed evidence of a shift in culture and officer “buy-in,” especially with the divisions of the department most closely associated with the model. Participants agreed that DDACTS is an effective and sustainable initiative. The first wave of focus groups identified several areas in need of improvement, most notably with providing training, addressing concerns over resource depletion, and delivery of a clear message about the foundations and goals of the program.

Second, the Shawnee SPI team administered surveys to businesses and residents in the DDACTS target area, well after program implementation. Results indicated that a majority of respondents perceived a greater police presence and more traffic stops in the area, and they expressed support for high-visibility, targeted traffic enforcement. Moreover, most respondents stated that DDACTS has improved the quality of life in Shawnee, and the majority rated the relationship between SPD and residents and businesses as very good to excellent.

Third, the Shawnee SPI team employed a quantitative impact evaluation of DDACTS by comparing trends in crime over a six-year period (three years pre-implementation and three years post) in the target area and a comparison area. Using both bivariate and interrupted time series analysis, the SPI team demonstrated that the DDACTS model produced statistically significant decreases in robberies (88 percent), commercial burglaries (84 percent), and vehicle crashes (24 percent). The Shawnee SPI experience highlighted several important lessons for police managers and line officers, including recognition of the fundamental connection between crime and traffic problems, the importance of program fidelity through careful implementation, and the need to overcome the tendency to view DDACTS through a “zero tolerance” lens that minimizes the collaborative, data-driven, and problem-solving aspects of the model.