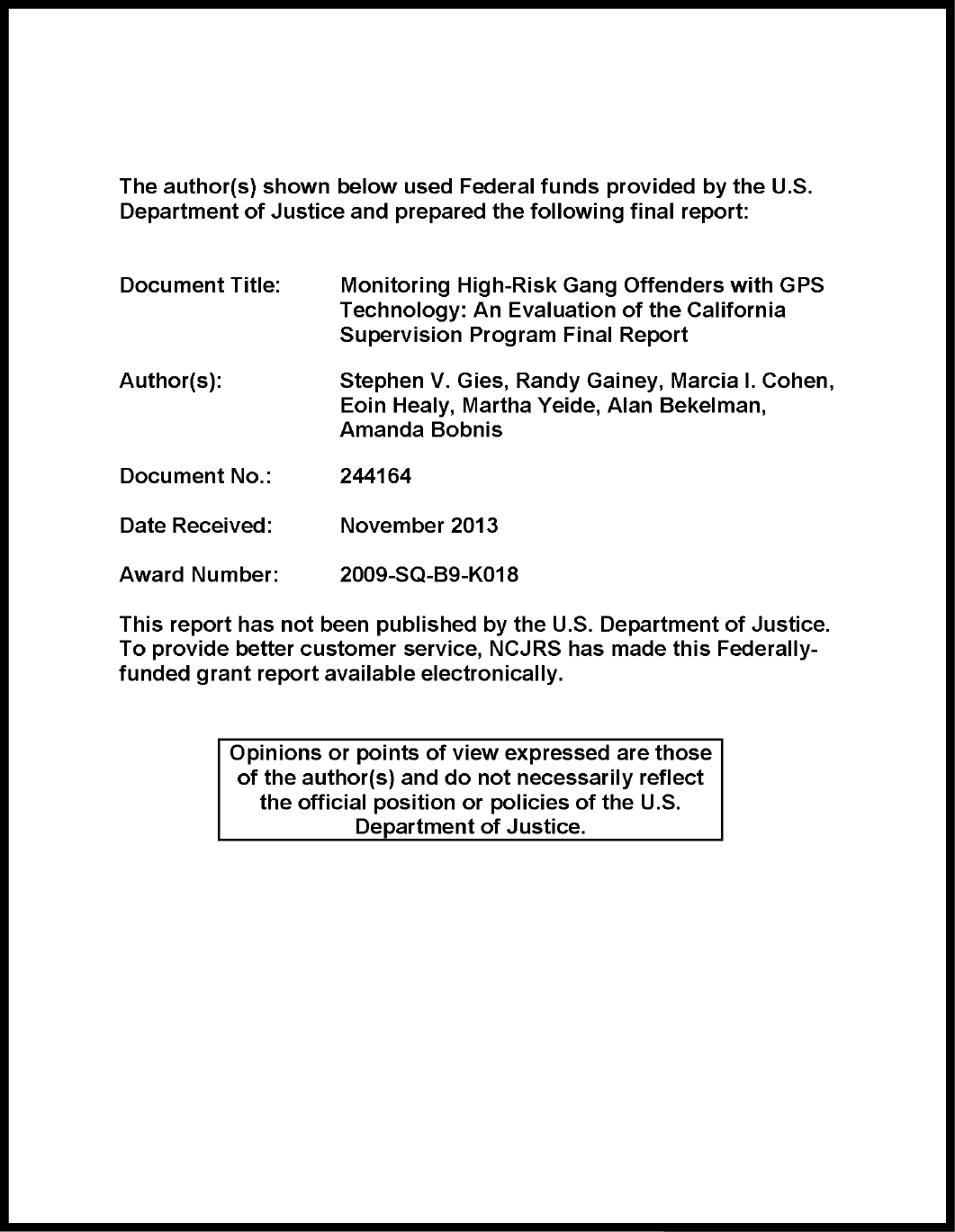 Despite the overall decline in violent crime nationally, gang violence rates throughout the country have continued at exceptional levels over the past decade. Therefore, it is vital for parole departments to have effective tools for maintaining public safety. The purpose of this evaluation is to determine the effectiveness of global positioning system (GPS) monitoring of high-risk gang offenders (HRGOs) who are released onto parole.

This study integrates outcome, cost, and process evaluation components. The outcome component assesses the impact of the California Department of Corrections and Rehabilitation’s Di vision of Adult Parole Operations (DAPO) GPS supervision program by employing a nonequivalent-group quasi- experimental design, with a multilevel discrete-time survival model. A propensity score matching procedure is used to account for differences between the treatment and comparison groups. The study population is drawn from all HRGOs released from prison between March 2006 and October 2009 in six specialized gang parole units in the State of California. The final sample includes 784 subjects equally divided between the treatment and control groups. The treatment group consists of HRGOs who were placed on GPS monitoring, and the control group consists of matched gang offenders with a similar background. The resulting sample shows no significant differences between the groups in any of the propensity score matching variables.

The effectiveness of the program is assessed using an intent-to-treat (known as ITT) approach, with two main outcomes of interest: compliance and recidivism. Compliance is measured through parole violations; recidivism is assessed using rearrests and rearrests for violent offenses. Each outcome is assessed with a survival analysis of discrete-time recidivism data, using a random intercept complementary log–log model. In addition, frailty modeling is used to account for the clustering of parolees within parole districts.

The findings indicate that during the two-year study period, subjects in the GPS group, while less likely than their control counterparts to be arrested in general or for a violent offense, were much more likely to violate their parole with technical and nontechnical violations. Descriptive statistics and summary analysis revealed more GPS parolees were returned to custody during the study period. These results will be studied further in a forthcoming follow-up report.

The cost analysis indicates the GPS program costs approximately $21.20 per day per parolee, while the cost of traditional supervision is $ 7.20 per day per parolee — a difference of $14. However, while the results favor the GPS group in terms of recidivism, GPS monitoring also significantly increased parole violations. In other words, the GPS monitoring program is more expensive, but may be more effective in detecting parole violations.

Finally, the process evaluation reveals the GPS program was implemented with a high degree of fidelity across the four dimensions examined: adherence, exposure, quality of program delivery, and program differentiation.