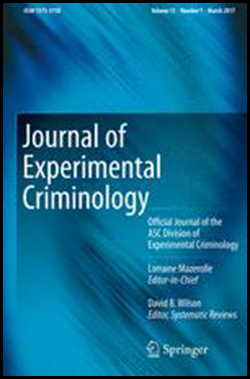 Objectives To test an offender-focused police intervention in residential burglary and residential theft from vehicle hot spots and its effect on crime, arrests, and offender recidivism. The intervention was prevention-focused, in which detectives contacted offenders and their families at their homes to discourage criminal activity.

Methods The study was a partially blocked, randomized controlled field experiment in 24 treatment and 24 control hot spots in one suburban city with average crime levels. Negative binomial and ordinary least squares (OLS) regression were used to test the effect of the presence of intervention and its dosage on crime and offender recidivism, and examination of average and standardized treatment effects were conducted.

Results The analyses of the hot spot impact measures did not reveal significant results to indicate that the treatment had an effect on crime or arrest counts, or on repeat arrests of the targeted or non-targeted offenders living in the hot spots. However, the relation-  ships, while not significant, were in a promising direction.

Conclusions The collective findings from all four impact measures suggest that the intervention may have had some influence on the targeted offenders, as well as in the treatment hot spots. So, while the experimental results did not show an impact, they are promising. Limitations include large hot spots, the low case number, low base rates, and inadequate impact measures. Suggestions are provided for police agencies and researchers for implementing preventive offender-focused strategies and conducting studies in suburban cities.