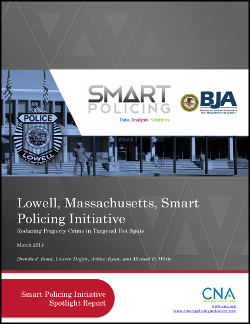 From 2007 through 2008, the city of Lowell, Massachusetts, experienced a 15 percent increase in property crime, driven by surges in car theft (12 percent), burglary (14 percent), and larceny (21 percent). Much of the increase was tied to drug offenders who committed crimes to support their addictions. The Lowell Smart Policing Initiative (SPI), funded by the Bureau of Justice Assistance (BJA), sought to address drug-related property crime through problem-oriented policing and the SARA model: Scanning, Analysis, Response, and Assessment. A Steering Committee composed of department staff and researchers who were well versed in advanced problem solving led the Lowell SPI. In order to avoid some of the traditional problems with SARA implementation, the Lowell SPI team employed a more sophisticated problem-solving process that assessed the congruence or “fit” among the targeted crime problems and the different elements of the SPI strategy.

As part of the analysis phase, the Lowell SPI team collaborated with the city Health Department to examine the background and history of all individuals who died as a result of a drug overdose in Lowell from 2005 through 2008. Results confirmed the strong link between drug use and property crime. The SPI team then identified 12 property crime hot spots across three sectors, most of which were near known drug markets. Lowell crime analysts identified comparison hot spots that were matched to targeted hot spots using a matched-pair design. Captains in each of the three sectors generated response plans which were discussed, modified, and monitored at the bi-weekly SPI Steering Committee meetings. Sector Captains also completed bi-weekly surveys which systematically captured the strategies and tactics that were employed in the targeted hot spots. The survey results documented a high degree of congruence between the targeted crime problems and the selected crime reduction strategies.

Results from the assessment phase indicate that each sector experienced significant declines in property crime from the pre-intervention period (9/2009–10/2010) to the intervention period (9/2011–12/2012). These crime declines ranged from 16 to 19 percent, though specific hot spots experienced much larger drops in certain crime types (e.g., from 40-50 percent in some hot spots). In the East and West Sectors, the crime declines were notably different from crime patterns in the matched comparison hot spots. In the North Sector, crime declined significantly in both the targeted hot spots and the comparison hot spots. Taken together, these findings provide compelling evidence that the Lowell SPI led to substantial reductions in drug-related property crime.

The Lowell SPI highlights the importance of accessing non-traditional data to extend the problem analysis process. The Lowell experience also demonstrates the importance of near-real time monitoring of the problem-solving model, with a focus on achieving alignment or fit between identified crime problems and response strategies. The emphasis on congruence between problems and responses can allow law enforcement agencies to avoid “shallow” problem solving, which has often emerged in problem-oriented policing projects and can limit the potential for successful crime reduction.