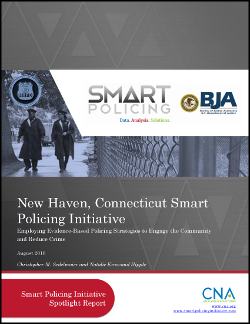 The New Haven, Connecticut, Department of Police Service (NHPD) received a Smart Policing Initiative (SPI) grant at a time when local violent crime levels were higher than they had been since the mid-1990s and NHPD was operating at reduced force as a result of budget cuts and retirements.

Partnering with a researcher at the University of New Haven, the New Haven SPI team sought to address rising violent crime rates and the number of local shooting incidents by increasing the use of data-driven decision making in daily police operations. The SPI project would employ supplementary foot patrols in the most violent neighborhood in the city, an area called “Newhallville.” The intervention would address violence and gun discharges, while also enhancing community engagement in Newhallville. NHPD specifically focused on:

In July 2013, NHPD began the 13-week intervention of supplementary foot patrols in Newhallville. The department’s Crime Analysis Unit (CAU) prepared daily “flash sheets” for officers and residents who requested them. These flash sheets were bulletins containing maps, crime data, and other information provided by the CAU and other sources. The SPI officers were strongly encouraged to make informal contact with community members as frequently as possible.

Through observation and interaction with Newhallville residents, the officers identified insufficient street lighting and neglected properties as two persistent neighborhood problems. And working in supervisory roles, the district manager and sergeant leveraged relationships with community groups and other city agencies to address these problems.

The New Haven SPI experience presents several lessons learned for both police managers and line-level officers. For managers, the POP model is adaptable, and departments can modify it to fit challenges or situations that are unique to the local community, as New Haven did. Additionally, projects like SPI need champions, because personnel changes can challenge project continuity and support. For line-level officers, the New Haven SPI revealed that officer input and activity in intervention implementation along with accurate data collection and feedback loops are vital. Finally, and because lasting change takes time, managers should ensure that line-level officers have access to data, as well as to open communication channels, for an active feedback loop.